Preparing for a Smallpox Bioterrorist Attack: Pulse Vaccination as an Optimal Strategy

At the height of the US invasion of Iraq, bioterrorism was a real and urgent concern. In particular, many feared that laboratory strains of the smallpox virus—a virus that had been eradicated in 1979—had reached the wrong hands and would be used to devastating effect. Thus, in mid-2003 the Israeli Ministry of Health initiated a collaboration with IMBM to attempt to determine the optimal vaccination policy for dealing with a smallpox bioterrorist attack.

Previous studies had attempted to model and assess the efficacy and costs of the following smallpox vaccination strategies:

Unfortunately, these studies produced conflicting results, possibly because they all made different assumptions about how the smallpox virus would behave in a contemporary population. Additionally, previous studies did not take into account long-term effects of an outbreak, despite the fact that infectious diseases such as smallpox have periodic dynamics: after an outbreak, incidence of the disease soon diminishes to undetectable levels owing to herd immunity; however, epidemics (of diminishing potency) still recur every few years as new, susceptible individuals enter the population.

We examined a new vaccination approach that takes into account the periodic dynamics of smallpox epidemiology. This approach, called pulse vaccination, involves vaccination of small parts of the population at specified intervals after the attack.

We compared the pulse vaccination strategy with preliminary vaccination and with one-time mass vaccination. Ring vaccination was not examined, as it is not considered a feasible policy in Israel owing to the country’s small geographic size and high population density.

We evaluated strategy efficacy using a weighted cost function that incorporated parameters such as the number of deaths by infection and the number of deaths resulting from vaccination. (The smallpox vaccinia vaccine may cause side effects, some of which can be fatal.) We also tested a broad range of disease-related parameters to ensure that our results would be robust to varying potency of the smallpox virus. 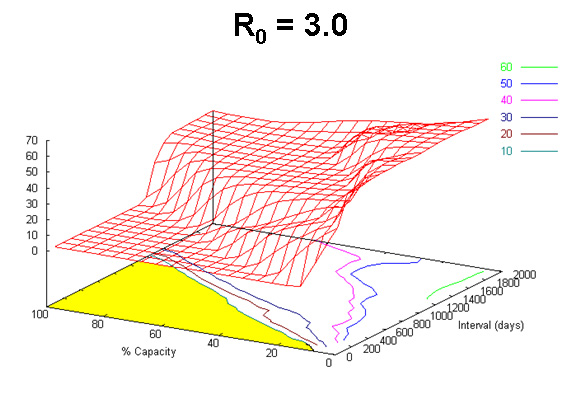 Our simulations showed that pulse vaccination was significantly more effective than preliminary or one-time mass vaccination in preventing recurring smallpox outbreaks. Furthermore, we observed that for the pulse strategy to be effective, a critical ratio between the number of vaccinees and the interval between “pulses” (vaccination campaigns) must be maintained.