Mathematical models that predict melanoma patients’ response to immune checkpoint blockers, such as pembrolizumab, could contribute to better informed clinical decisions. We developed a simple ODE-based mathematical population model for pembrolizumab-treated advanced melanoma patients, and analyzed the local and global dynamics of the system. Our results show that zero, one, or two steady states of the system exist in the phase plane, depending on the parameter values of individual patients. Without treatment, the simulated tumors grew uncontrollably. At increased efficacy of the immune system, i.e. due to immunotherapy, two steady states were found, one leading to uncontrollable tumor growth, whereas the other resulted in tumor size stabilization. The model analysis indicates that a sufficient increase in the activation of CD8+ T cells always results in stable disease, whereas significantly reduction in T-cell exhaustion, another process contributing CD8+ T cell activity, entails a temporal reduction in tumor mass, but fails to control disease progression on the long run. Importantly, the initial tumor burden influences the in-treatment dynamics: small tumors responded better to treatment than larger tumors. In conclusion, our model suggests that disease progression and response to ICB depend on the interplay of melanoma and immune dynamics and provides a foundation on which mathematical modeling strategies could contribute to immunotherapy personalization in the future. 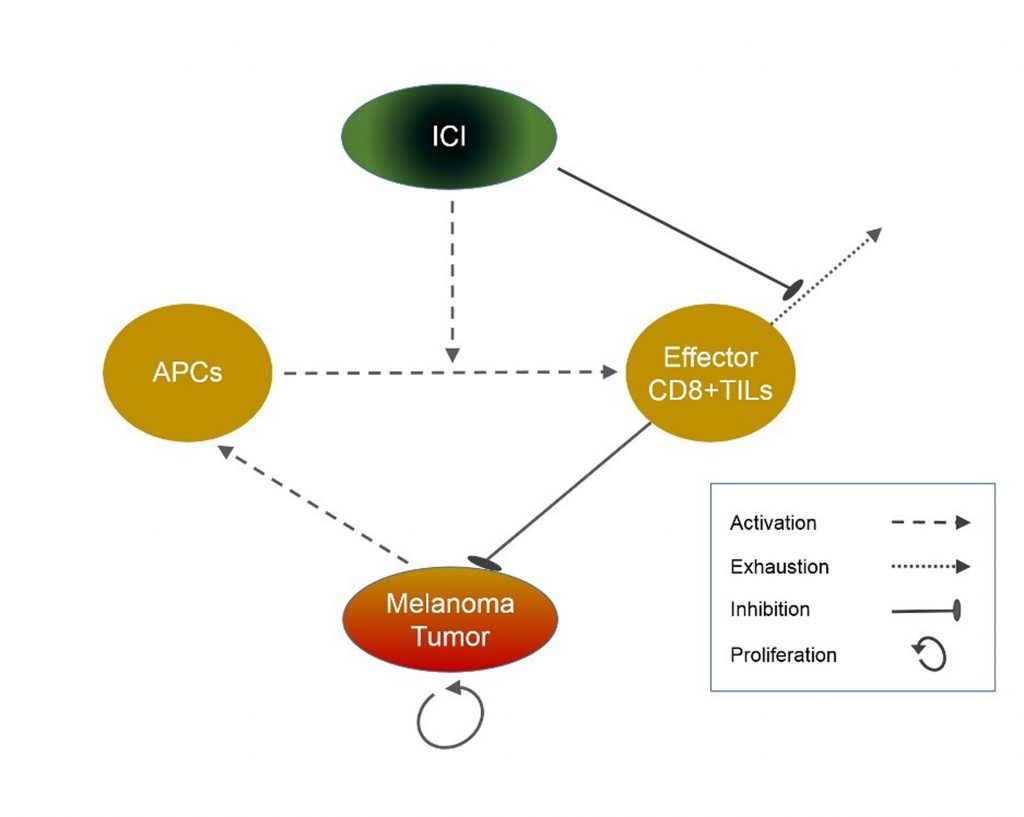 At present, immune checkpoint inhibitors, such as pembrolizumab, are widely used in the therapy of advanced non-resectable melanoma, as they induce more durable responses than other available treatments. However, the overall response rate does not exceed 50% and, considering the high costs and low life expectancy of nonresponding patients, there is a need to select potential responders before therapy. Our aim was to develop a new personalization algorithm which could be beneficial in the clinical setting, for predicting time to disease progression under pembrolizumab treatment.

We developed a simple mathematical model for the interactions of an advanced melanoma tumor with both the immune system and the immunotherapy drug, pembrolizumab. We implemented the model in an algorithm which, in conjunction with clinical pretreatment data, enables prediction of the personal patient response to the drug. To develop the algorithm, we retrospectively collected clinical data of 54 patients with advanced melanoma, who had been treated by pembrolizumab, and correlated personal pretreatment measurements to the mathematical model parameters. Using the algorithm together with the longitudinal tumor burden of each patient, we identified the personal mathematical models, and simulated them to predict the patient’s time to progression. We validated the algorithm’s prediction capacity by the Leave-One-Out cross validation methodology.

Among the analyzed clinical parameters, the baseline tumor load, the Breslow tumor thickness, and the status of nodular melanoma were significantly correlated with the activation and exhaustion rates of CD8+ T cells. Using the measurements of these correlates to personalize the mathematical model, we predicted the time to progression of individual patients (Cohen’s κ = 0.489). Comparison of the predicted and the clinical time to progression in patients progressing during the follow-up period showed moderate accuracy (R2=0.505).

Our results show for the first time that a relatively simple mathematical mechanistic model, implemented in a personalization algorithm, can be personalized by clinical data evaluated before immunotherapy onset. The algorithm, currently yielding moderately accurate predictions of individual patients’ response to pembrolizumab, can be improved by training on a larger number of patients. Algorithm’s validation by an independent clinical dataset will enable its use as a tool for treatment personalization.

Immune checkpoint inhibitors, such as pembrolizumab, are transforming clinical oncology. Yet, insufficient overall response rate, and accelerated tumor growth rate in some patients, highlight the need for identifying potential responders.  Our objective was to construct a computational model, identifying response predictors, and enabling immunotherapy personalization. Therefore, the combined dynamics of cellular immunity, pembrolizumab, and the melanoma cancer were modeled by a set of ordinary differential equations. The model relies on a scheme of T memory stem cells, progressively differentiating into effector CD8+ T cells, and additionally includes T cell exhaustion, reinvigoration and senescence. Clinical data of a pembrolizumab-treated patient with advanced melanoma (Patient O’) were used for model calibration. Virtual patient populations, varying in one parameter or more, were generated for retrieving clinical studies.  Simulations captured the major features of Patient O’s disease, displaying a good fit to her clinical data. A temporary increase in tumor burden was obtained only when assuming aberrant self-renewal rates. Variation in effector T cell cytotoxicity was sufficient for simulating dynamics that vary from rapid progression to complete cure, while variation in tumor immunogenicity has a delayed and limited effect on response. Simulations of published clinical trials were in good agreement with the clinical results, demonstrating positive correlations between response to pembrolizumab and the ratio of reinvigoration to baseline tumor load. These results were obtained by assuming inter-patient variation in the toxicity of effector CD8+ T cells, and in their intrinsic division rate, as well as by assuming that the intrinsic division rate of cancer cells is correlated with the baseline tumor burden.

This study shows that hyperprogression can result from lower patient-specific effector cytotoxicity, a temporary increase in tumor load is unlikely to result from real tumor growth, and the ratio of reinvigoration to tumor load can predict personal response to pembrolizumab. Upon further validation, the model can serve for immunotherapy personalization. 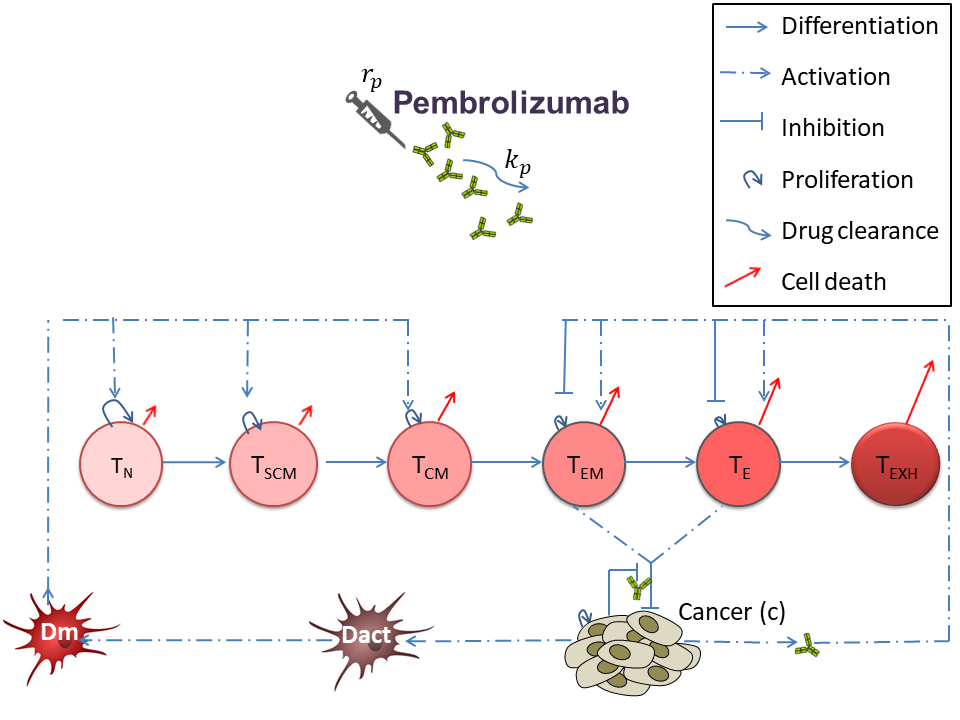 Interleukin (IL)-21, a cytokine that was discovered a decade ago, is capable of eliciting potent antitumor responses in several solid cancers, as evidenced by an array of preclinical and clinical studies. Yet, the drug possesses complex immunomodulatory functions, and has been only partially effective in the clinic thus far. Conditions for beneficial IL-21 immunotherapy remain elusive, and a rational and systematic analysis of beneficial IL-21-based treatment strategies has long been called for.

We have extensively studied the effects of IL-21 on tumor eradication, by mathematically modeling the influence of the cytokine on natural killer (NK) cell- and CD8+ T-cell-mediated lysis of solid tumor cells. The model (schemed in Figure 1) accounts for IL-21 mediated death/proliferation of cells, as well as their tumor killing capacities and memory effects. To allow for analysis of IL-21 systemic therapy, the model contains an additional pharmacokinetic (PK) component describing IL-21 bioavailability in the cancer tissue. Model parameters were estimated based on a variety of experimental studies: Data was obtained from studies in which tumor-bearing mice were treated with IL-21 via genetically-modified IL-21-secreting cells (e.g. cytokine gene therapy), and from experiments in which mice challenged with melanoma or renal cell carcinoma were treated with IL-21 systemically. The model was validated by its accurate retrieval of experimental melanoma and renal cell carcinoma dynamics under numerous IL-21 regimens using different treatment periods, doses and administration routes (Figure 2). Most parameters were independent of the tumor type or treatment design, supporting the model’s generality and relevance for various cancer indications and therapeutic conditions.

When simulating the model under several alternative regimens and strategies, we arrived at important therapeutic insights concerning systemic IL-21 therapy. First, the importance of early treatment onsets, and the benefit of reduced dose-intensities, was clearly shown in our analysis. Moreover, when studying fractionated scheduling (Figure 2), the model predicted that splitting the standard daily 50 μg regimen into an equally intense schedule of two 25 μg doses applied twice a day would result in a significantly stronger antitumor response (a 45%-reduced tumor mass). The benefit of this fractionated regimen was experimentally confirmed in melanoma-bearing mice treated by the model-suggested splitting protocol (Figure 2). This serves as additional prospective validation of the model. 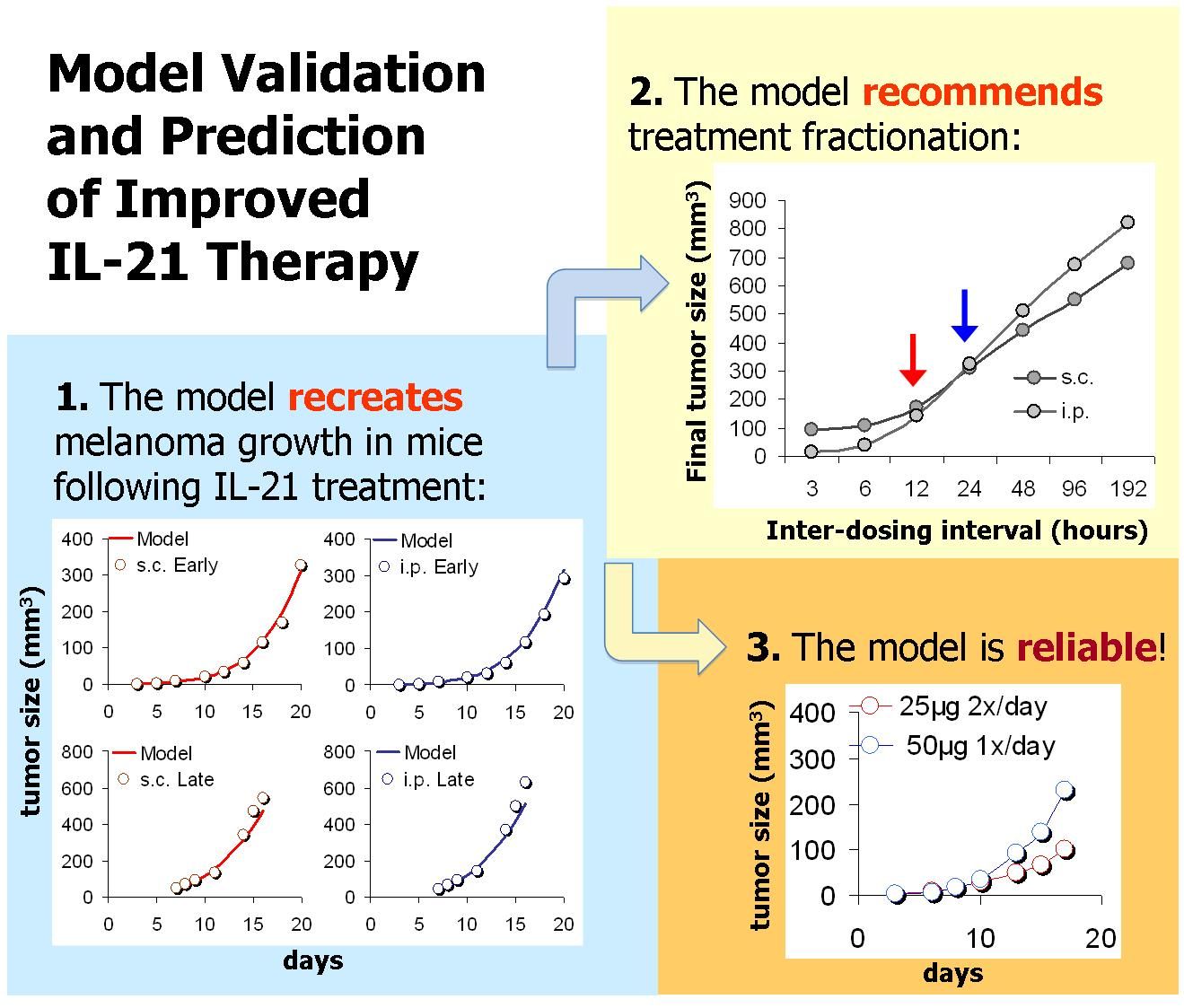 In summary, our analysis shows that by employing mathematical methods to construct a general biologically-relevant model, IL-21 treatment strategies with improved efficacy can be fashioned. Such a tool could be highly instrumental in both streamlining and clinically applying the cytokine in solid cancer patients in the very near future.

Each year about 20 thousand new patients are diagnosed with malignant gliomas (MG) in the United states. Adult primary MG are among the most virulent forms of cancer. Median survival for high grade MG varies from 18 months (Stupp, et al., 2005) for GlioBlastoma Multiforme (GBM, Grade IV) to three to five years for grade III MG (Kleihues, Soylemezoglu, Schauble, Scheithauer, & Burger, 1995; Kleihues, et al., 2002). Due to their genomic instability, heterogeneity, and infiltrative behavior in their sequestered location beyond the blood brain barrier (BBB), MG are refractory to conventional treatments, including surgery, radiation, and chemotherapy. Thus, novel therapies are sought, notably immunotherapy, in the hope they offer a survival advantage.

In recent years cancer immunotherapy has shown some success and carried far less risks and side effects to the patients than traditional therapy (de Vleeschouwer, et al., 2006). Clinical trial of Kruse (Kruse, et al., 1997; Liau, 2001) reports six patients treated with alloreactive cytotoxic-T lymphocytes (aCTL), three of whom were recurrent grade III MG patients and the other three were recurrent GBM patients. The six patients were treated with periodic intra-tumoral aCTL infusions 2-3 times within two weeks, followed by a rest period of 6 weeks. This process was repeated for five cycles, total dose of administered aCTL varying between 108 to 5.2•109 cells (Kruse, et al., 1997). Although technically complicated, passive aCTL immunotherapy overcomes two major problems encountered in systemic immunotherapy: it is independent of the often anergic patient’s own immune system, while the use of intracranial infusion bypasses the BBB hurdle. Indeed, the above clinical trials showed success in that two of the grade III patients survived for at least 12 years after treatment and one survived for 40 months post treatment. However, all GBM patients died within several months. This discrepancy between the success in curing grade III MG and the failure of GBM immunotherapy points to a crucial difference between the characteristic system dynamics in the two indications.

The aforementioned difference may be clarified by analyzing the reaction rates governing the disease and immune processes. The dynamics of tumor-immune system interactions are complex, involving cytotoxic processes, cytokine modulation, migration through extracellular matrix, as well as negative and positive feedbacks by paracrine and autocrine factors. In order to study these dynamics and propose new insights in immunotherapy treatment approach, we have constructed a mathematical model for glioma and the immune system interactions, that may ensue upon direct intra-tumoral administration of ex vivo activated aCTLs (Kronik, Kogan, Vainstein, & Agur, 2008). Our model encompasses considerations of the interactive dynamics of aCTL, tumor cells, major histocompatibility complex (MHC) class I and MHC class II molecules, as well as cytokines, such as TGF-β and IFN-γ, which dampen or increase the pro-inflammatory environment, respectively.

The mathematical model successfully retrieved clinical trial results of efficacious aCTL immunotherapy for recurrent grade III MG. It predicted that cellular adoptive immunotherapy failed in GBM because the administered dose was 20-fold lower than required for therapeutic efficacy. Model analysis suggests that GBM may be eradicated by new dose-intensive strategies, e.g., 3•108 aCTL every 4 days for small tumor burden, or 2•109 aCTL, infused every 5 days for larger tumor burden. Further analysis pinpoints crucial bio-markers relating to tumor growth rate, tumor size, and tumor sensitivity to the immune system, whose estimation enables regimen personalization. Our work shows that, depending on the patient’s disease parameters, a personal infusion rate threshold exists, below which the patient is expected to be refractory to the treatment and above which tumor elimination is predicted (Kogan, Forys, Shukron, Kronik, & Agur, 2010).

We propose that the path of adoptive cellular immunotherapy should be maintained and improved. It may prove efficacious for GBM, if dose intensity is augmented, as prescribed by the mathematical model. Under the currently available T-cell therapy methodologies, individual planning of dosing schedules may contribute to improving success of adoptive T-cell therapy.